Five Things You Should Know

"Stars are rare creatures, and not everyone can be one. But there isn't anyone on earth - not you, not me, not the girl next door - who wouldn't like to be a movie star holding up that gold statuette on Academy Award night." - Sue Mengers

The 88th Academy Awards airs on February 28th, which means we are counting down the days to find out if Leonardo DiCaprio will finally bring home an Oscar. We’re pretty sure Leo is tired of hearing “better luck next year”, so we wanted to build an Oscar predictor to let him know if he should bother practicing that acceptance speech or not. Actually no, we just wanted to build an Oscar predictor.

So, what does it take to get that golden statue anyhow? We used the IMDb database to find gather as many features as we could on movies that have been nominated for an Oscar, and trained several versions of Oscar predictors using data from 1981 to 2004. For each version, we counted how many times we got it right using data we set aside from the Oscars in 2005 and 2006. This was a good way to see how our final Oscar predictor would fare in future Academy Awards. We finally settled on 'Oscar Predictor 7.0', a model that predicted Oscar outcomes with an 81% accuracy rate. The predictor was built using a Random Forest Classifier, but instead of getting into the nitty-gritty details about what that means, we’ll give you the Buzzfeed version.

Early Birds… Do Not Get The Worm

That’s right, when it comes to winning an Oscar, it seems that given a film is nominated, it will more likely win if released later in the year. According to the Oscar Rulebook (yes, there is such a thing), films must be released by December 31 of the previous year in order to be eligible for the February award show. Seems like filmmakers don’t want to show all their cards too early according to the data. Nominated movies that were released in August, September, November and December won over 30% of the time compared to movies released in May, which won less than 20% of the time. While we cannot say that releasing a movie in December will increase your chances of winning an Oscar, there does seem to be something magical about that time of year.

Speak With an Accent

Our analysis also used information about the countries of origin of each movie. Now, the Oscars are an American event, and American films take home the lion's share of the awards. But in terms of percentage of nominated movies that win, two countries stand out: Italy and Spain. Over 40% of nominated movies from Italy take home an Oscar, and Spanish-origin came out to be an important predictor in one of our models. The USA (and other English-speaking countries) didn't fare nearly as well. Bet you regret not paying attention in high school Spanish class now, huh? 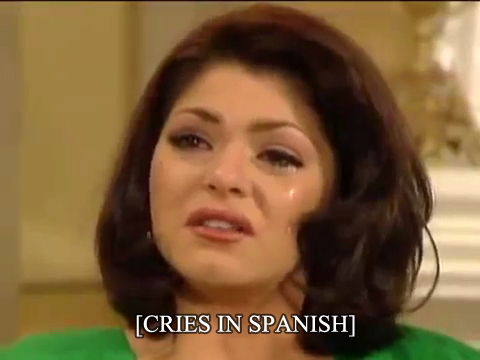 “Violence for the sake of violence, I don't think has any effect.” ― Alfred Hitchcock

IMDb gives a list of keywords and genres associated with a movie. Oscar Predictor 7.0 found that these were pretty helpful in separating the Haves and the Have-Nots. Films with keywords like 'blood' and 'violence' (especially those in the 'Thriller' genre) tend to perform poorly. Yet somehow, war movies do really well in our model. If you find that a bit contradictory, then you can always make a family film or musical. Those also tend to win more than other genres.

Nominated for Best Picture is a Shoe-In

But Avoid Being Nominated for Best Cinematography

Oddly enough, there are some categories that, if nominated for, lowers a film’s probability of winning. A couple versions of our Oscar Predictor indicated that filmmakers should avoid being nominated for Best Cinematography, Best Sound Mixing, Best Costume Design if they want a chance at winning an Oscar. These are almost like second tier categories...so one possible theory is that the big guys (the ones that were nominated for Best Picture) were also nominated for these secondary awards. The little guys, who only had one shot at winning an Oscar for having great costumes, has no chance. Bummer.

Now before you go off and make your Oscar-winning movie, we want to leave you with one final quote for thought, from five-time Oscar winner Clint Eastwood:

Winning an Oscar is every filmmaker's dream. As movie buffs and aspiring filmmakers (…just kidding), we wanted to see what it took to win the golden statue. Currently there are 24 categories ranging from Best Picture to Best Sound Editing. We all had our own suspicions of what movie features are associated with winning an Oscar. We set out to find the probability of a film winning an Oscar given it is nominated. More specifically, we wanted to find a classifier that could identify the winners and the losers.

We obtained a complete list of all the Oscar nominated films through the 79th Academy Awards in 2006 from ya-shin.com. Although the data came in a csv file, there were several layers of data cleaning involved before being able to analyze the data. We analyzed only the data between 1981-2006, as the categories have remained relatively constant during this period. The data for each movie included the categories the film was nominated for and won. To include features for the films that could be predictive of winning an Oscar, we utilized the IMDbpy package to complete our dataset. IMDbpy is a Python package that contains various movie features from the IMDb database.

The data had a handful of continuous and semi-continuous variables such as runtime and month of release date, however the majority of the features were categorical, such as genre and keywords. Knowing that sklearn could only accept numerical variables as inputs, we converted all the categorical variables into dummy variables. To reduce the dimensionality, we used only the most-common categories in our analysis.

We began with exploratory data analysis to identify what variables would be important in building an effective classifier. Grouping the movies by winners and losers, we were able to visually determine if any variables were good separators. For example, a film nominated for Best Picture is more likely to win an Oscar. This makes sense because films nominated for Best Picture tend to be the best movies across all categories. Therefore, even if the movie does not win Best Picture, it is likely to win an Oscar in one or more different categories.

We were also curious to see if keywords could be predictive of Oscar winners. For each of the top 25 keywords, we found the proportion of nominated films that won, which are plotted below. Among the frequent keywords were "blood", "death", and "violence". From EDA, it was difficult to tell which keywords would be helpful in our classifer. 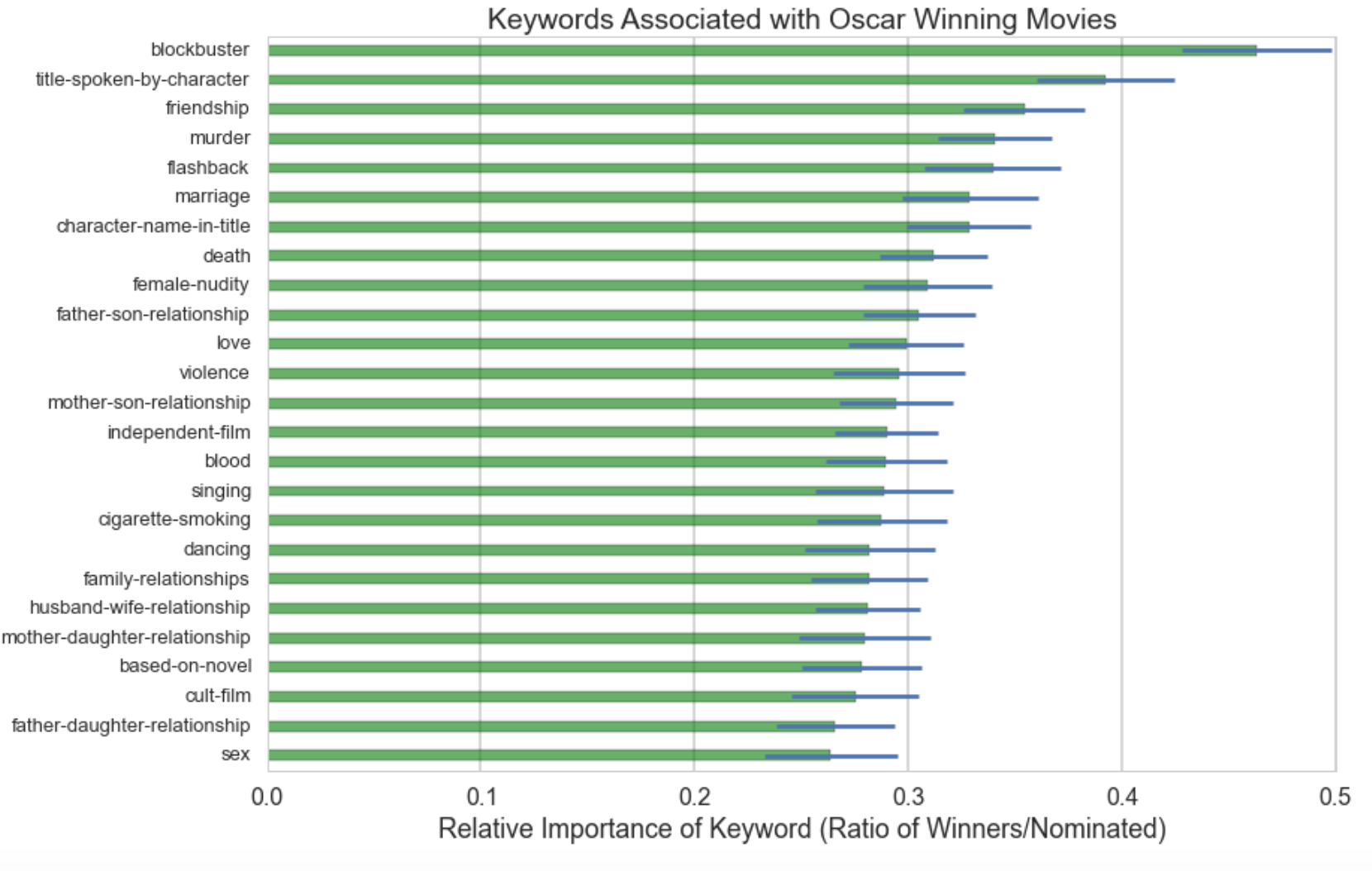 Since our project was focusing on prediction, we fit a variety of statistical models and tested the performance of each on data from the 2005 and 2006 Oscars (the latest years that we had data for). Ultimately, we found that the machine learning technique called Random Forests performed the best. It predicted Oscar winners for 2005-2006 with an 81% accuracy. This is an improvement from a 71% baseline accuracy (if we predicted all movies to be losers). So although there’s clearly room for improvement, the relative success of our final model indicates that we did capture some of the most important features that make a movie Oscar-worthy.

We used decision surfaces to see how the classifer was deciding who was a winner when it came to month of release and number of nominations. The plot confirms that there are many winners late in the year. The plot also illustrates that the movies released later in the year must receive more nominations to increase probability of winning. However, we suspect that this may be overfitting a few end-of-the-year high performance losers, and further analysis is needed. 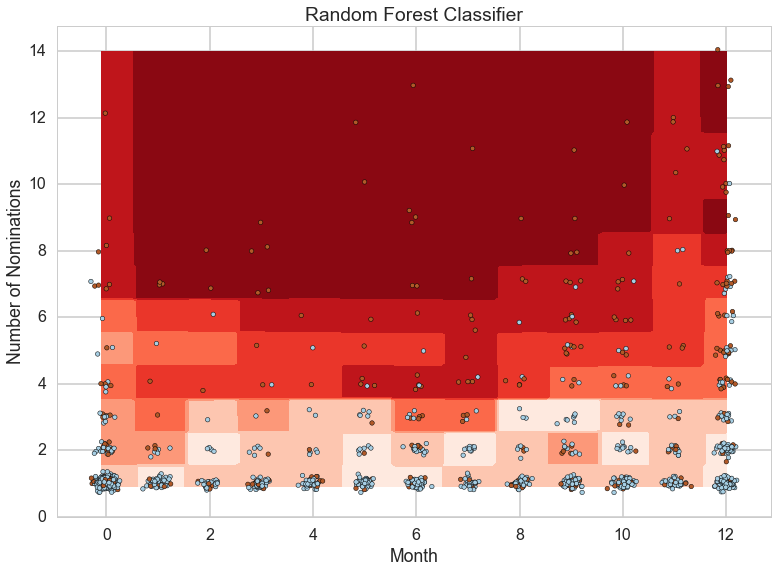 Conclusion and Next Steps

Moving forward, we would like to look at predicting what kinds of movies win certain awards (i.e., Best Picture, Best Costume Design, etc.). In order to maximize the amount of data we were working with, our analysis treated each ;win' as an equivalent outcome, when this is not in fact the case. Ideally, we would collect more data and use a wider range of years to perform a new analysis on each individual award, since only a fraction of total movies nominated for an Oscar are nominated for any one award. Another possible extension is analyzing which features make a movie more likely to be nominated in the first place, in comparison to the general body of movies that are release in any given year.

We also felt that we could have improved our accuracy by incorporating more features, particularly a movie's cast, into a predictor. Typically Oscar-winning movies have a cast full of A-list actors and actresses. Although we did develop a way to compute the "star power" for a given movie, it was very computationally intensive, making time the only obstacle from including the cast. This also could have been extended to compute "director power" and "producer power."

Lastly, we would consider using a different method to create keyword features in our analysis. To reduce the dimensionality of our data, we only selected the top 25 most-commonly appearing keywords in Oscar-nominated movies (out of a total of more than 15,000 that appeared at least once). Many of these keywords dealt with closely-related subjects, so we could have clustered them into broader 'themes' using Latent Dirichlet Allocation (LDA) to capture more information from each film.

Best of Luck in February, Leo!

For even more details, see our full work on github!